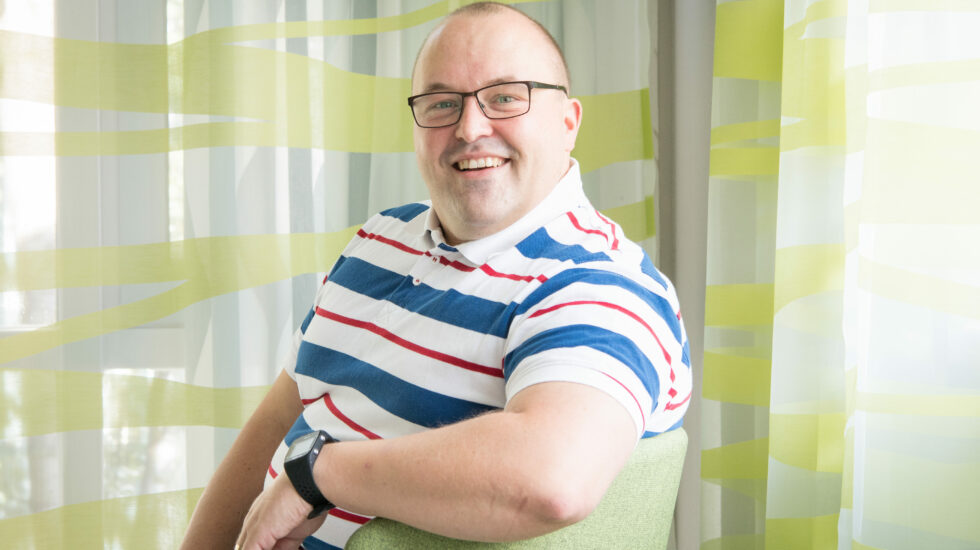 How and when did you end up at Mtech?

I joined Mtech in April 2002 as an intern for four months and was still a student in the Helsinki University of Technology, currently known as Aalto University. The internship went well and was then followed by a part-time job and then a summer job. I was given more responsibility and eventually was encouraged to complete my master thesis with the company. This I did, focusing on user-friendliness, usability, and technical solutions for a program used by breeding experts in pig evaluation. In 2004, after graduation, I continued here as a full-time lead developer. In addition to pigs, I was introduced to bovines as well. Eventually, I became responsible for the cow and pig breeding software, then operated by an organisation named Suomen Kotieläinjalostusosuuskunta, aka SKJO. Nowadays, the bovine breeding is handled by Faba Osk.

I was promoted as programming manager in 2006 and at that time, we had roughly a dozen developers. Being a manager in this position was a window to practically all the things we did or still do, ranging from milk recording to our product development. We were pretty waterfall-driven, as we having separate teams for design, development and testing/QA. In 2009, after our present CEO Christian founded the marketing department, I followed in his footsteps and became the head of the software development department. We had already started to grow and adapt towards modern software development and the traditional waterfall organisation transformed into a team-based one.

I remember that we had nearly 60 people working in our department, over half of the company then. In 2014, we had a significant organisational change and many of our functions became more aligned with the businesses and partners we work with. At that time, I became a Chief Technical Officer and was responsible for both software architecture, project management practices, as well as hardware solutions and our data centre. During those years I took more of a role with our customers and as of 2017 have been serving this company as a Vice President.

What do you do here?

First of all, I am responsible for Mtech customer-owners who are revenue-wise, the largest business unit we have. This work is accomplished by great people working for Faba Osk and ProAgria, and companies close to this core we have. As I see it, we help our owners with their digitalisation and software development progress, which I have to add is very state of the art. If you think that digitalization is somehow lacking or slow in agriculture, at least in our owners’ case that is not true at all.

Personally, I think that it is part of my nature that I need to do what must be done in order to keep the business running and customers happy.

From the organisational perspective, my role in this company is a combination of governance and problem-solving, tempered with innovation and overall development. My daily tasks consist of attending meetings, consulting teams and customers, and tasks related to my responsibilities. I like to do things in addition to just deciding on them and actually, I even remember a case last year where I acted as our call center for a brief time; a very educating experience. Therefore, my role is dynamic yet focused more on running the company to succeed by making it more competitive and inclusive and personally learning to do this better for the benefit for our partners and ourselves.

I try to keep my work days “normal” and that succeeds sometimes. I have a bad habit of checking mails or reading Slack messages in the evening or during the weekend, but I try to balance my work and personal life. Working here is fun, but sometimes things can pile up as well. In general, I have several meetings a day but I try to reserve time for development as well – both for the company as was well for myself personally. With a long history and some knowledge in many things, I feel that sometimes I can help lead people to right direction, even if my time contributing is limited. As for new things, I have been learning to be a board member as well, in this case, for our daughter company Neviso.

What kind of things excite you at work?

It’s a quite remarkable journey in that I have had in Mtech. I started from an intern position eventually becoming a Vice president. I still become a little nostalgic when I remember my first work desk next to the emergency exit. I have always been impressed by the excellent attitude the people working in this company have and that probably is the reason I still am here. After all these years, there are still new things to see, new problems to solve, and customers to help. Above all, I think that is most intriguing.

Nicest Memories related to the Mtech?

As usual, the best feelings come from the successful completion of the projects and thier expected outcomes. Out of the many, one specific project for the animal breeding program where I worked as a project manager gives me the most delightful memory in terms of achievement. This project was criticised by many as being impossible. Still, our team not only finished the project on time and within budget, but also successfully received 100/100 on its satisfaction rating from our customers. We thrived to obtain a similar success and I think that’s what keeps us going.

I am also pleased about the organic growth of this company; nevertheless, I dream that this company can grow even more significantly with international prospects and with them, talents.

I want to see this company become more global and honestly, I think we can make it.

What do you do on your free time?

Being a father of two amazing daughters and having our own house in Porvoo, I don’t think I have a problems with too much free time. There are always things to do, hobbies to deliver my daughters to, etc.  I am pretty confident with a hammer, so much so with practically zero knowledge, we renovated our house, built a warehouse, and fixed several other things since we moved in 2006. In addition, there are some pretty solid, hand-made benches on our terrace.